At long last, Chapter XVII of Between the Lion and the Wolf (BLW) is complete! I’m roughly 1200 words into Chapter XVIII, and I’ve got some ideas for fleshing out the events between now and Chapter XX.

I don’t know why it took so long to complete Chapter XVII. Granted, work has been busier than usual (not necessarily a bad thing!), I caught a cold—which is still lingering, and all the stuff surrounding Christmas. Anyway, I don’t anticipate wrapping things up before midnight tonight: nearly three more chapters in twelve hours is more than I’m willing to endure today!

Even while not writing, I have been attempting some minor consistency checks. I think we’re all good for now. After the last three chapters are finished, of course, I’ll go back and edit the whole thing. And then have a third party give it a once (or twice!) over. It’s getting to the point that every page I complete paves the way toward a smoother climax—and that’s exciting!

I can’t remember if I mentioned my goals in a previous post, but once BLW is ready for prime time, I’m going to republish Beneath the Vault of Stars, too. Mostly for minor grammatical and stylistic improvements: if you’ve already read it and managed not to tear out your hair over count disagreements or errant commas, you won’t be missing anything! (If you haven’t…)

I went camping in South Carolina—on the banks of the Chattooga River—with my cousin, too. (It’s hard to complete a chapter without WiFi!) Every year in early December, he picks a place for a long weekend. Twenty-nineteen marked the twentieth anniversary he’s been doing this, and he invited me to go along. I’d gone a few years back (to a different location, nearer Lake Toxaway); this year, we ended up in the Ellicott Rock Wilderness (I’ll include some photos below). We never did find the actual Ellicott’s Rock (and apparently there are two: the original and the geographically-correct), but even in December, it was great to get outdoors. My brother flew down from Maine, and another cousin flew out from Utah; Wednesday night, we practiced tying a few knots; Thursday night, we drove down to Greenville, SC, where my cousin treated us to a meal at Connelly’s.

I ended up needing to leave early, but even though I had to cut things short, I enjoyed getting to see my cousins and my brother. I’m reminded that I should make more effort to find a place to hang a hammock—even if it’s sometime in the middle of the week! 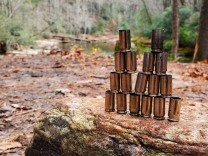 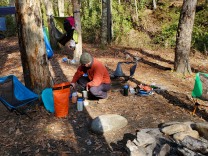 All right. Time to complete Chapter XVIII! (Or at least make a little more progress!)

One thought on “Another chapter complete: three to go!”