You’ve probably figured out I grew up in Maine (since I can’t seem to shut up about it), and I love every opportunity to visit, to see how things have changed (and haven’t) over the last…20 years now! One of this year’s highlights? Attending the Maine Author Day at the Guilford Memorial Library. Not only did I have an opportunity to meet some new people, but I also got to catch up with some family friends that I hadn’t seen in quite some time. Below are a couple of photos from the event: 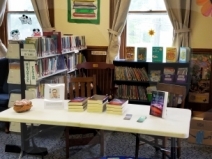 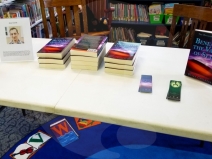 Once I got there, I realized I hadn’t been inside this library since high school, and so much had changed! Built in 1908 with funding assistance from Andrew Carnegie, Guilford has since added another “wing” with an octagonal “tower”-looking thing and converted what I remember as a nasty, dungeon-like basement into a bright, usable space (where the library staff provided sandwiches from the local Subway for all the authors). Even though the event only lasted a couple of hours—and even though it was gray and raining outside—I’m grateful for the opportunity!

Let me shift gears for a moment and talk a little about some of what draws me back to Maine. It’s mostly family (most of which still lives not too far from where I grew up), but it’s memories, too. Memories from Sebec Lake, where my grandparents had a small “camp” (a lake house for non-New Englanders); from some of the nearby mountains, like Borestone and Barren and beyond. Today, my parents own that little camp: on Google Maps, you can see the roof of the bunk house Dad built a couple years ago.

I didn’t get a chance to climb Borestone this year (Elliotsville, Maine), but my brother and brother-in-law and I did climb Number 4 Mountain, located within Frenchtown Township a few miles north of Greenville, Maine. It’s a “short” mountain, just over 2800 feet, and it’s only 1.8 miles to the summit…and it had rained the day before we hiked, but there’s an old fire tower at the top. The remains of one, anyway! I climbed the 40 or 50 feet to the top, sat on a few half-rotted boards, and took a few photos (which I haven’t yet downloaded from my DSLR). According to the Forest Fire Lookout Association, the current steel structure is from 1925. (Before that, there was a wooden structure from 1913.)

I did take a few photos with my phone (of Sebec Lake and of Number 4 Mountain):

My parents have a cat (a girl named Wallace) who’s maybe 17 years old and still hunts, and an English Mastiff named Lizzie. I don’t know if they’re just plain friendly, or if they remember me despite my lengthy absences: 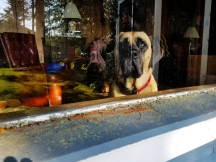 If you’ve read even a single chapter from Beneath the Vault of Stars (BVS), you’ve undoubtedly discovered it takes place wholly elsewhere than Earth, much less the United States in general or Maine in particular! That said, it’s no stretch to admit that I’ve tried to describe certain scenes according to things I’ve experienced growing up in Maine. While the geology (and geography) is totally different, I still draw heavily on what I remember (accurately or not!) when building Kalas’ world.

And speaking of Kalas’ world—the world in which The Daybringer takes place—I’ve finished writing Part I for Between the Lion and the Wolf (BLW)! It’s roughly 99,000 words, but I have yet to edit it. I’m not sure just how long Part II will be, but BLW looks like it’ll be nearly twice as long as BVS! I’m trying—really!—just to write the story. It’s…it’s a big story! I’d originally intended to complete it before the end of 2018, but that seems improbable right now. Still, there are a few months left in the year…

One thought on “Back from Maine!”