Holy smokes! I knew it had been a while, but apparently, the last time I posted anything here was back in October! Right around the time a bunch of…stuff interrupted any progress on Between the Lion and the Wolf (BLW). Life stuff. I hear that happens from time to time.

After that, Thanksgiving happened, then Christmas was just around the corner…You’ve probably experienced similar situations on occasion. In between pockets of…whatever it was that seemed to get in the way, I did add to my “outline” for BLW (on occasion), and Kalas and company have always been somewhere within the fringes of my consciousness—along with a nagging suspicion that I really need to get back to work on Chapter XIII.

I’m not sure why transitioning from where things are now to where they need to be comes across as so off-putting lately. I’ll get it done—I’m not concerned about that. I guess I’m comparing where I was roughly this time last year: Beneath the Vault of Stars was “finished” and available, and I’d hammered out the first chapter or two of BLW. Today, there are logistic changes I’ve yet to make, and I’m camping on Chapter XIII. I think I’ve sat on this chapter longer than I sat on Chapter VII. Which is saying something, because Chapter VII took some time to complete! In a nutshell, my characters need to retrace some steps, and the trick is sequencing things in a way that a) advances the narrative and b) remains interesting for the reader. That’s what I’ve been “outlining” when moments permit: 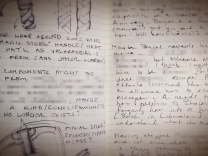 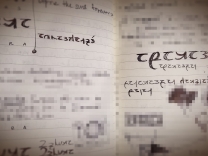 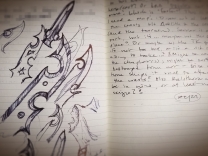 Beyond book-stuff, I’ve also been working in my shed. My workbench is just about finished: I got a front vise I still need to install—that’ll require fabricating a pair of jaws from a length of red oak, too. My desk is almost complete. The structure of it, at least. I still need to route a few slots for shelves and cut and laminate the top, but it’s taking shape, and there’s an end in sight. I still don’t have many photos of the desk progress, but here’s a shot of the “end” pieces with their dadoes cut:

Another big time sink: arcade emulation. A few years back, I had grandiose plans to build a full size arcade cabinet. I created a 3D model and artwork for it, themed a front-end, and…filed it away. For a few years. Recently, I dusted off those old files—and modeled some smaller things, like a “fightstick,” a 2-player bartop, and a cocktail table. None of which exist as anything but ideas right now. (That said, I think I’ll have [almost] enough offcuts to build the fightstick. I have the joystick and a handful of pushbuttons from prior endeavors, too.) The boys typically waste countless hours playing Smash Bros., Minecraft, even vintage NES classics (Metroid, Pro-Wrestling, etc.), so clearly the responsible thing to do is provide access to even more video games.

So…yeah. This post is a little all over the place. I know it’s been a while, but with the new year underway, without “resolving” anything, I do hope to finish up BLW—and get Book III started!—looong before 2019 is through!