I mentioned heading down into Linville Gorge in a previous post. Over the weekend, that’s where I was: above and below the “Grand Canyon of North Carolina,” trying really hard to not feel every one of my 40+ years!

We parked a car outside the Table Rock Picnic Area—because the picnic area itself wasn’t open for the season. Along the way, we stopped to check out some signage, including the helpful notice that the Spence Ridge trail bridge was out, and that there were no river crossings available in the Gorge. Maybe smarter people would have paid closer attention. Maybe.

At the Cabin Trail trailhead, we ate lunch—I do not like cold “soy ginger” chicken. Yecch. That’s when I noticed the zipper for one of the compartments on my pack just…quit: not the end of the world, but annoying. Then we descended into the Gorge, and, at first, everything seemed fine: 50-ish degrees felt like 70, the wind was refreshing rather than aggravating, and the descent wasn’t too extreme. I sipped some water, snapped a few photos, and we kept going.

By the time we reached Babel Tower, I think all of us were starting to feel the effects of losing so much elevation in so little time! The wind had picked up, too, and threatened to toss my hat into the Gorge. We crossed paths with someone lugging fishing gear—and nothing else—down to the river. Reminded me of something my brother might do! In hindsight, here’s where I should have been drinking more water…

We lost the trail a few times (if you’ve been down into the Gorge, you know that’s not as ridiculous as it sounds!), and, when we finally reached our campsite for the evening, we discovered one of us lost his sleeping bag! Facing low thirties that evening, two of us searched for firewood while the other two retraced our steps.

They never found the sleeping bag.

At this stage, I felt headache-y and puke-y and just all around miserable. I told myself I was through with backpacking! I tried to force myself to eat the beef stew I’d brought, but I only managed about a third of it before I thought I might vomit. With camp set up, I crawled into my sleeping bag early and hoped I’d feel better in the morning.

The other guys let me sleep until about 9, I think. (Thanks, guys!) After breakfast, we packed up and walked another tenth of a mile or so to the Spence Ridge bridge.

What was left of it, at least.

It’s been seven or eight years since I was last down in Linville Gorge, and the bridge was intact at that time. I don’t remember the water being so high or so fast, but it was in the fall, so I’m sure that had something to do with it. After mapping out a route through the water—sooo cold!—and after watching another group come through it from the opposite shore, we stripped down to underwear and forded the river.

Soon, after what we thought was a steep trail, we reached a fork in the trail: turn left toward the Spence Ridge parking area, or veer right toward Little Table Rock Trail. We took the trail.

We probably shouldn’t have.

My knees had felt like hamburger all the way down; this day, they actually felt all right, but my quads! My calves! Even my triceps! For whatever reason, a thousand feet of elevation didn’t sound like that much when we were just talking about it, but I’m pretty sure at least a mile of whatever connected us to Little Table Rock was steeper than a 30% grade. By the time we reached the “flat” portion and the spur toward Table Rock’s summit, we were spent. Hiking up the Gorge is probably some of the most strenuous hiking I’ve ever done.

Even after we reached the picnic area and its blessed paved surfaces, we still had to hike another mile and a half to the car. We survived, and drove straight to Judge’s Riverside, where I think each of us ate way too much.

Here’s a brief selection of photos from this weekend (I still need to process my DSLR photos): 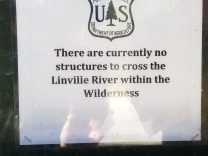 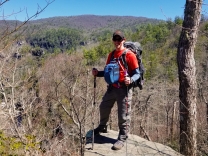 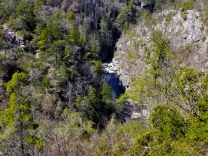 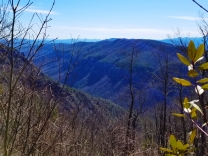 Seven or eight years ago

It’s amazing how different I remember Linville Gorge from almost a decade ago versus last weekend! Back then, we thought we’d come down Babel Tower, bounce across Spence Ridge and up to Table Rock’s summit, then come back across the river and scoot up Conley Cove before hiking back on the road to our parking spot. (We didn’t actually make it to Table Rock then, either…) Sometimes I forget I’m in my forties, or maybe I just think I’m more capable than I am! Still, despite my misgivings from Day 1 last weekend, I think I’d like to return to Linville Gorge sometime. Even if it’s just to hike in a couple miles, find a nice camp site, and do nothing for three days!

Before that, though, I’ve got a book to finish…